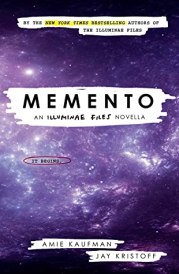 AIDAN is the AI you’ll love to hate.

The advanced AI system was supposed to protect a fleet of survivors who’d escaped the deadly attack on Kerenza IV. AIDAN was supposed to be infallible. But in the chaotic weeks and months that followed, it became clear that something was terribly, terribly wrong with AIDAN…

AIDAN and his beginnings aboard the Alexander.

I felt so bad for Olivia Klein. Gone though so much, finally seeing a way out and she speaks the truth: ‘The benefits of reading include, but are not limited to, stress reduction, vocabulary expansion, stronger analytical skills, and memory improvement.’

This tidbit just goes to prove that AIDAN is a sick, twisted, creepy thing that should never have been released on this fictional world! I’m actually angry!

5 thoughts on “Review: Memento by Jay Kristoff and Amie Kaufman”